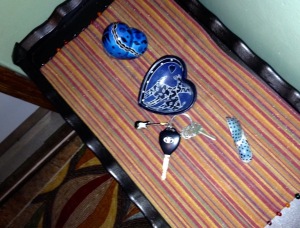 I had a planned vacation day today, one which initially I thought would be a beach day. Seeing how the weather was not supposed to be favorable, rain off and on throughout the day, I decided to do something I seldom do: plan a day at home to actually accomplish some well-overdue household tasks. It was a practical sort of day – one that would leave me feeling just as great as a day at the beach and with far more of a sense of accomplishment. Man, the things I was going to get done…

I got a letter in the mail last Friday, from my doctor’s office, saying it was time to schedule an annual blood test, one that I’d need to fast for. Great, I’ll schedule it first thing Wednesday and then go out to breakfast after. I’d start the day accomplishing something immediately.

Last night, I had a meeting after work, and grabbed a yogurt parfait for a quick snack prior, thinking I’d pick up some dinner on the way home. I already had a chicken satay from a particularly favorite restaurant in mind. The meeting ran long, and I lingered after. It was past 9 pm and I was on my way home, talking on the phone to my mom, when I realized, shoot, I have to fast for 12 hours and I’m already at the 12-hour mark. UGH, and I was starving. I considered rescheduling the appointment  and then kept thinking, no, I really need to get this out of the way. I had a very small snack when I got home thinking the world wouldn’t end if I fasted for eleven-and-a-half hours instead of 12. I’d go to bed early and not think about being hungry.

Except one of my dogs decided he’d stay out longer at his last call for the evening outdoor trip and I ended up trying to doze on the couch so I’d hear his front-door bark to come back in. And that lasted a while. And then he decided to wake up and need to go out a couple of times during the night, and as I kept trying to fall back to sleep in the muggy, muggy night air enveloping me, the well-rested night turned into a very drowsy awakening. I set my alarm early and had a back-up alarm an hour later – which apparently I shut off and went back to sleep. Until 9:03 am. As I gazed, glassy-eyed, at my phone, the time quickly registered and I jumped up and immediately called the doctor’s office to see if I could still come. Turns out that although I was given an appointment, I didn’t really need one. Fabulous.

I got ready quickly, ran out the door, and went back to ensure I locked it. Well, locked it I did and with my car keys on the table next to the front door. I reached for my phone to call my son, who had slept elsewhere the night before, and saw that I was dangerously low on battery power, nearly ready for complete power loss. My car doors were locked and I had no spare key on me. Fortunately, my son answered on the first couple of rings, but had to find a ride to get to the house. And he did, finding my situation kind of comical (although I’m sure not when I woke him up).

I got to the doctor, signed in at the lab, only to find I had to actually go upstairs and someone would take care of me there, not the usual procedure, but at least I was finally back on track. By this point, I was unbelievably hungry – and the sun was shining. It was pretty darn near a beach day for a while. Nevertheless, I persevered. I was ready for breakfast and then a day filled with tasks crossed off the list.

I ordered a delicious breakfast, and took real pleasure in every bite, applying apple jelly to every crumb of the toast and savoring each home fry with my omelet. As I finished up, the server brought my check, saying to take my time. Not me, I was on a mission today, and quickly reached into my purse for my wallet – except, it wasn’t there. My bag is deep yellow, as is my wallet. I was sure I missed it. I looked again, digging deep this time, and suddenly flashing on my wallet sitting on my kitchen table. I had laid it there as I pulled my phone charger out of my bag before leaving the house. For a minute, I wondered if my debit card was still with sunglasses in the case in my bag – and remembered that after having it there all weekend during beach days, I thought it prudent to return it to my wallet yesterday. What to do?

Fortunately, I was familiar with the owner, a former classmate of one of my kids, and asked if I could speak with him for a minute. I told him how embarrassed I was, but I didn’t have my wallet, and would gladly write a check if he wanted or could return to pay the check. He agreed to the latter, telling me if not, he had plenty of dishes to wash. When I got in the car, I again called my son, who was nearby and asked if he had cash on him. He didn’t, but was planning to go to the same restaurant in a short while and would take care of the check, which I now had in my purse. I told him I’d drop it off and would text him when I got to where he was.

As I approached the house, he walked from the backyard, smiling. He said, “It’s like you and I have changed places today.” And I had to agree. I handed off the check and said that I was pretty sure that my wallet was on the kitchen table and he looked very amused and told me that maybe I needed to be a bit more responsible with my things – a statement said many times by me to him over the years. Once again, I couldn’t help but agree.

When I got home, I decided to read Rolling Stone for a bit, which had arrived earlier in the mail while I waited to get back in the house to get my keys. I settled in to a big leather chair that I bought months ago and seldom just relax in. I thought, you know, it’s a day off, relax for a while, actually take the time to read more than one quick feature and run off to do something else. Take the time. You’ve got the whole day (well, another half a day at least).

At one point, still feeling hungry, I got up to grab a bag of crunchy veggie sticks, and as I set myself back down in the chair, I realized the pillow that I had behind my head in the recliner had slipped. I reached up with the hand with the bag of veggie sticks to straighten it, and as I did, I saw the contents were dropping out across the floor. Why this didn’t dawn on me immediately to use the other hand is beyond me, but it was pretty much typical of the day thus far and I burst out laughing very loud.

And I thought about all I planned to accomplish, staining woodwork, perhaps painting something, thinking about the muggy weather and the amount of time it would need to truly dry in this weather – and I wondered about whether I should touch anything today that might prove to be really messy. And I did some housework instead. I tidied up, did some laundry, cleaned the bathroom, sorted out mail and generally kept away from anything I could get into trouble with. I didn’t accomplish a lot, but I did accomplish some things, and I got in some time to relax, watched a movie, read a magazine, got a jump on two new courses I start next week and caught up on a lot of email correspondence. They might not be huge things, but I got them done just the same. So much for the best-laid plans.