30 years ago today, ten days overdue, I wondered if my soon-to-be-born baby would ever arrive. I wasn’t feeling great, but had been told by an OB/Gyn standing in for my own doctor that day that I most likely had a stomach bug. “No, I had similar symptoms when I went into labor with my son.” He wasn’t buying it. And I wasn’t buying his response either.

However, I went home and sat on the couch that evening, no labor in sight – some stomach cramping, but nothing that stopped me from polishing off half a pint of Haagen Daz sorbet. My son was asleep and my husband taking a bath. I remember shouting from the living room around 10 p.m., “I feel like these stomach cramps have some sort of pattern to them.” Per usual, he didn’t think I was in labor. (This reaction became consistent behavior with all four births). A half-hour later, he was calling his parents to come watch our son and we were on our way to the hospital shortly thereafter.

My labor, at the hospital, consisted of me running to the bathroom several times while contractions increased rapidly. I had momentary fear I’d be become one of those moms who actually gave birth on a toilet (insert your own shudder here). Not more than a few pushes later, my beautiful, 10-lb. baby girl arrived. At the time, women were still moved from labor rooms to delivery. Ridiculously, we traveled over quickly, I was hoisted on the delivery table and Marissa Skye made her debut in what seemed like moments later, Even at nearly 11 days overdue by this hour, I never imagined I’d give birth to a child that looked at least two weeks old – and she was perfect. I’m sure the other babies in the nursery were wondering, “What’s up with this toddler? Why’s she here?” 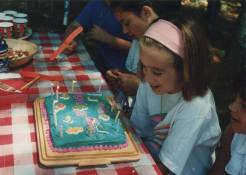 Her birth was indicative of her life thus far as a daughter. Not a lot of fuss or drama. Throughout the years, I’ve heard any number of horror stories about arguments and sass, tears cried (by both parties) and how rough it is to raise a daughter. I don’t have much to add to that conversation, except this: The toughest part of raising my daughter is knowing what the world can sometimes be like for a woman – the expectations, the disrespect and the vulnerabilities she’ll experience. The most tears I’ve cried are in knowing I’ve sometimes failed her – in spite of my best intentions – and in preparing for her to move out in her senior year of college. I cried for me, not her, because she had become this incredible adult I was so proud of and loved so much, but time moved far too fast for my liking. She was ready, and already older than I was when I left home, but I knew how much I was going to miss her. 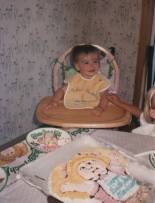 Throughout the years, she’s welcomed me in her life, even during the far more private teen years, and I feel so blessed by how much I’ve been able to share of her life, even now as she approaches 30. She’s made wise choices, worked hard to earn her bachelor’s – going to school three days a week and working full-time the other four, married the person who she’s loved since she was 16 and earlier last year, became a mother.

As often happens, her birth experience was not quite what she expected and she learned the day prior to his birth that her overdue son was following in her footsteps – yet he was topping the scales at over 11 lbs. A C-section would follow – and it was in the hours after that I marveled at how natural it was to see she and her husband as parents. I was humbled in the days to come by her resilience, her lack of complaint when surely she was in great pain and how brave she had been throughout the week prior.

It has been amazing to watch her become the mom she has to my beautiful grandson. For someone who never had much interest in children, it’s like she has been doing this all of her life. Her love for her son has amplified all of her best qualities and added a confidence to her personality of which she probably isn’t even aware. 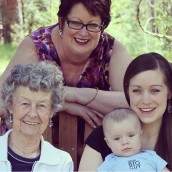 So she is about to turn 30, and it tugs at my heart. It’s bittersweet as I miss the girl she once was, but I’m so excited for the woman she now is and the possibilities ahead of her. As any parent will say, time goes by too quickly, far too quickly. Yet, I remember so many moments, many that she may never recall – and those are the moments that sustain me as time continues to spiral us forward. I still see her sweet smile – mirrored always in her eyes, too – and the little ponytails, and the love for every new pair of sneakers. Sometimes her long hair is in a braid and I can’t help but reach out and feel its texture, hold it for a second in my hand, remembering all the mornings braiding her hair so long ago. I see the care she takes in choosing new sneakers, even now, and how her smile is still one of my favorite things – and especially now seeing it in her son too.

I’m so very proud of the woman my daughter has become. She’s stronger than she knows, smarter than she realizes and so very capable of handling whatever life brings her way. She has taken on far more than many women twice her age – acting as a guardian for a chronically ill parent and taking on the role of the family organizer so much of the time. I rest easy knowing that she is the next generation foundation that will always keep our family close.

Happy 30th birthday, Marissa Skye! It is such a privilege to be your mother. I love you so much.