This past weekend, we did the final cleanout of my parents’ house – my childhood home – and while I knew it would be emotional, I wasn’t as prepared as I thought I would be. What was toughest to deal with was seeing my dad’s garage empty, devoid of personal items. Funny, it’s been 16 years that he’s been gone, but I still think of the garage as his – and for a man of few words, someone rather hard to know actually, that garage provided a glimpse into who he was and what mattered to him. And as my eldest son dismantled that world, bit by bit, ever-so-careful about what would be kept and what would be discarded or donated, it was if I was losing my dad all over again and what felt like, finally, for good. I know he’s in my heart, and always will be, but the last tangible evidence is now gone and it hurt.

At first glance, my father’s garage was a hodge-podge of things. In a home meticulous throughout, the garage had a bit more clutter than anywhere else, although neatly placed with purpose and order. There was just a lot of stuff in tiny containers, in covered glass jars, on shelves and in cabinets, and finally, atop the handmade workbench with its handcrafted drawers filled with a lifetime of collected tools. Most of the garage contents were of a practical nature; outdoor tools, household tools, nuts and bolts, screws and nails, cleansers and auto care products, so many of the things that kept the rest of the house and property maintained and in such incredible shape.

There was his radio, of course, still there attached to a small speaker. Whenever my father was in the garage, he had music on or talk radio — perhaps the game; and when he went up to shave each evening, his radio came, too. 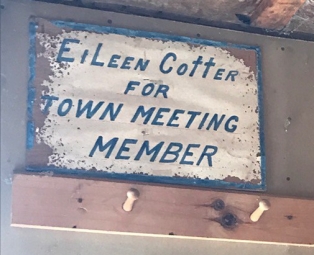 It was the walls, however, that told the tale of my father and what he held dear. There was a series of license plates, one from 1928, which he found somewhere and kept because it was the year of my mother’s birth. He kept a small assortment of plates, including two from my brother’s motorcycle and miniature bicycle license plates bearing my name and my brother’s. A hand-lettered sign was affixed to a wall – in fact, we couldn’t even remove it because it had been so solidly placed. My dad had made that, proudly, when my mother ran for office as a town meeting member in our town. When I say hand-lettered, it’s important to note how perfect each letter was, as it spelled out Eileen Cotter for Town Meeting Member. My father was an engineer and he was precise in every thing he did.

There was a hand-hooked rug bearing a likeness of the Old Salt. My parents loved nautical things – and my father was always so proud of anything my mother created. He had a paint-by-number picture she did on another wall, side-by-side with a painting I had done freehand of a barn on a country lane. Across on another wall was an amateurish effort I had painted of a sailboat at sunset, lots of vivid orange, yellow and red hues in the most rudimentary of styles. There were various handmade wooden pieces, each of which he made, along with a variety of patriotic things, including a simple decoupage of George Washington mounted on a square of wood.

Then there was the once-white metal cabinet, home to countless little jars, containers and tubes of products. Against all of his better judgment, I’m sure, he allowed me to paint it in neon colors, all in crazy free-spirited shapes abutting each other. I did this as a young teen, sitting cross-legged on a much smaller workbench before the garage was built and he moved the cabinet later from our laundry room/work space to the new garage where the paint eventually chipped over the past 40 years, although brightly colored remnants still remain. 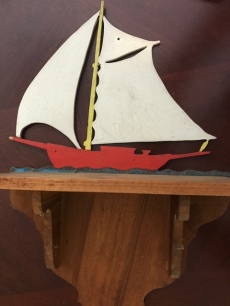 There were quirky items, like a little sailboat made from Pepsi cans, the sails covered with vinyl contact paper – and wooden items he made with his jigsaw, from doorstops to an elephant, a birdhouse and more. A sign bearing the name “The Cotters” hung for many years at their camp in Henniker, N.H. This was a place where they created countless memories after my brother and I moved away, and the sign was been taken by niece, who had many memories of time at the camp. In the weeks prior, we each made claim to some small items, from practical things like gardening tools to precious keepsakes, and yet on that last evening so much still remained.

As my son asked me about some of the final pieces, I struggled not to take everything that held memories. The old lawn cart, metal, chipping away paint from many, many layers of different colors and so many years of constant use, seemed silly to take – I had a brand new one of my own. I thought of the role that lawn cart played throughout the years – rides in it as a kid, using it for outdoor chores that I hated; more than that, this cart was a fixture throughout my entire life – and in the end, I couldn’t take it or throw it away. We left it for the new owners, hoping even in spite of its age, they’ll find it useful and if they don’t, I’ll never know.

In the midst of this, as I packed up remaining outerwear, I picked up one of my father’s jackets. We hadn’t kept his clothes after his death, but this jacket had been special. A proud patriot, and former Navy sailor, he delighted in wearing his royal blue VFW jacket with his name on the sleeve. As I held it in my arms, looking around at what little was left in the house, of a lifetime – my childhood – spent in that home, I clutched that jacket tight and sunk to the staircase in tears. These past few months, especially, were fraught with so much. Hard things were experienced, hard decisions were made, and throughout it, I kept thinking that my father would want me to do all that I could to ensure my mother was safe and taken care of as best as could be done.

And now, those decisions had been made, and all we had to do was finish packing. Everything I had held in started to let go. My son walked in and together, we sat on the dining room stairs, his arm around my shoulders, sitting quietly for a while before getting back to the business at hand.

Last night, we celebrated my mother’s 89th birthday, which is actually today, this year on Father’s Day. She is in better spirits, better physical shape and in a better place overall than she’s been in quite some time. The woman she was prior to the past six months becomes more evident with each day. We hadn’t seen her in some time.

So today is her birthday – and Father’s Day, too. There seems like some strange correlation this year. Her life has greatly changed, and we’ve closed an important chapter. Over the past month our family has gone through my parents’ life together in ways we had never done before. We remembered things almost long forgotten and took possession of precious memories and special mementos and perhaps most of all, realized the powerful past we shared.

We keep moving forward, from one cog to the next in this ever-moving circle of life. We may fall off the wheel at any time, unexpectedly, and the rest of us have no choice but to continue onward. It’s just the way things are.

On Father’s Day and my mother’s birthday, I am cognizant of what’s gone and what we still have and appreciative of the value of each.

6 thoughts on “What We Never Leave Behind”