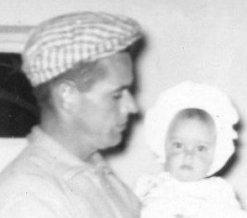 My father passed away fourteen years ago today, and it strikes me that he has now been gone more than a quarter of my life. Something about that is beyond bizarre to me, and yet his influence is felt every single day. I feel him in my attitude, the way I talk, and the manner in which I approach life itself.

So much has happened since he died – so many things I wish I could tell him. He wouldn’t say much in response. Never a big conversationalist, he would most likely nod or smile, or scowl dependent on the subject matter. He could get exasperated pretty easy, but I like to think he would have mellowed a bit more with age.

My mother always says that my father would never have survived in these times. He’d find them too upsetting, the world too crazy. I don’t know – he was pretty realistic. As an engineer, he looked at life strategically and was a straight shooter in his response to what life handed him. Or maybe she just knew him so much better than me and perhaps his failing health was in response to the world around him and his internal strife in viewing it.

Maybe I just idealize the man that has always meant the most to me.

That’s the beauty of loss really. We focus on the things that we loved most. We let everything else fall away and too often, we wait until death to let the little things go. Isn’t that the lesson in itself? Not waiting, but rather embracing every single thing and appreciating it all. 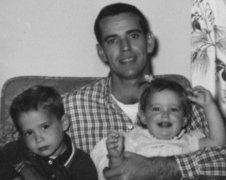 I feel fortunate that I had no outstanding issues with my dad – and I probably didn’t have a single one my entire adult life. My only regret is that his time with us ended far too soon, at just 74 years old. And in the little over five months that we knew we would lose him, as difficult as it was to know he’d soon be gone, we at least weren’t taken by surprise.

I still go over the last week of his life; the last five days really. That phone call telling me to come home – to my childhood home. The shock that the hospice nurse had already given him enough morphine that he was in a final sleep that he wouldn’t waken from. Although she knew I was on my way, she didn’t wait to let me say goodbye – something I’ve never understood. All these years later, I considered that perhaps my father asked not to wait, perhaps to spare me saying goodbye. I can’t think of any other sensible reason – and it’s most likely not the case, but it brings me comfort nevertheless.

Grandchildren, my brother and sister-in-law, my mother and I, we spent time with my father, said whatever we needed or wanted to say and simply sat with him. I stayed at my parents for the last five days of my father’s life, hoping he might come back even briefly, to see his eyes open once more, see him smile and soon enough, he was gone.

The last night of his life, I couldn’t sleep. I sat by his bedside, looking at family albums, going through the pages of his life and ours, taking stock of his accomplishments, and remembering so many special times that had seemed like any other day as they unfolded back then. His breathing was labored, and then it would resume to a normal flow. My mother and I didn’t really sleep that night, getting up to continually check on him and when I finally fell asleep near morning, my mother came in and said my father had passed. It was so hard to believe; the finality struck me hard.

Yet for all of the silence over those five days, all of the wishing for just a few more words, for my father to open his eyes
for just a short while, it was clear that he was on a journey that we weren’t privy to. There was a sense of peace almost, as sad as the time was – and I remember feeling what a privilege it was to be able to be there during those last five days.

The biggest privilege, however, is being his daughter.

You’ll always be the most special man in the world to me, Daddy.