People fascinate me–they always have. I like hearing their stories, learning about their lives and connecting my own observations to what I’m being told. When I travel, I particularly like to meet people wherever I am, especially if it’s someplace I’m not all that familiar with. It’s always cool to take in the local culture and visits some of the places that aren’t necessarily tourist destinations, although I’m usually down to see the must-go-to spots as well.

With that in mind, after a few hours in Pensacola the other night, I wavered between eating something really quickly and going to bed a bit earlier than usual and seeing a bit of the town. I took a quick cool shower to wake up a bit and decided to see what I could see since I didn’t anticipate getting back to Pensacola any time soon. I threw on a bright summer dress, quickly brushed back my wet hair and tied a scarf around my head before heading out the door. I felt like a bit of a mess, but I didn’t really care. Time was a-wastin’.

When I approached the front desk at the hotel, the woman behind the counter exclaimed (yes, exclaimed; she didn’t quietly say it), “Well, look at you, Miss Fabulous! I just love that dress!” I thanked her, and then she went on to tell me, just as loudly, that she had just bought Mexican tiles for her kitchen, and you know, if my dress just didn’t remind her of those tiles. Hmmm, I thought, that’s a first–even for me.

I inquired how close some little shops and restaurants might be and she told me about a mile down the road, which was an easy walk or a quick cab ride. I considered the walk and then given the heat, changed my mind and went back inside to see about getting a cab. I met up with someone else on our trip and asked if she’d like to come along. As she took a call, my friend from the desk came out to tell me that a cab was on the way. However, it went more like this, “Hey there, Miss Mexican Tile, the cab is on the way. You might want to walk back, but if you don’t here’s the address for the hotel on this card to show your driver.” Totally kind woman and quite helpful, but definitely an interesting character–and here I had two new names for the evening, too, Miss Fabulous and Miss Mexican Tile.

The cab driver that took us the mile or so to the historical district of Pensacola just couldn’t get over that we were all the way from New Hampshire and had a few misconceptions on what he felt life was like in our state, given that he knew little about it other than it snowed a lot there. He got a real kick out of us knowing about Bank of America, since he had no idea that it wasn’t just a local thing. Although it was after six at night, he was concerned that we hadn’t been able to visit the beach in the possibly three hours that we had been in Pensacola and said it wasn’t too late. He could take us there instead. We assured him we were all set. We wanted dinner. Hearing that we were heading to New Orleans the next morning, he cautioned us about the evil that might lurk there and told us to be careful. He was glad we were traveling together and wouldn’t be alone. All in all, he was a very sweet man, but once again, a real different sort of guy.

There seemed to be a trend starting.

Next, we stopped off at the ATM at Bank of America, which was fairly close to where we asked to be dropped off in downtown Pensacola. There was but one car in the parking lot, with a man sitting in it. He appeared to be busy doing something, and not in a hurry to get out. Within seconds of our transaction’s completion, his car door suddenly opened and we heard a voice shout, “I knew y’all were going to cut in front of me. I knew it!” Turning his way, wondering if he was serious or not, his car door fully opened and his shoes were flung out on the pavement. Next he stepped out and stood up, buttoning his pants. He said, “It’s alright. I was changing my shorts anyways.” Needless to say, we walked away fast. Very fast. 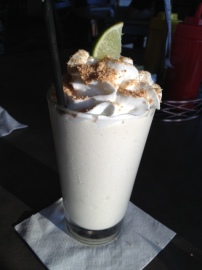 We perused the shops and restaurants, and admired the architecture and cool vibe on Palafox Street. A couple of restaurants weren’t open on Mondays, narrowing the options. We eventually ended up at a funky place called The Tin Cow, where the milkshakes are spiked and diners can create their own burgers, chicken sandwiches, veggies burgers and the like by marking up the desired ingredients on a laminated menu with a grease pencil. The food was fantastic; the atmosphere totally great and my Key Lime Milkshake was beyond delicious. In fact, I wish I had another right now. Things were looking up–not a single bizarre happening yet here.

Regretfully taking our leave of this wonderful spot, we decided to go for a cab again rather than brave the walk back. It had been a long day.  I made the call and as we waited at our allotted corner for it to arrive, a woman in a cheetah print dress with an oddly zombie-like facial expression drifted across the street in our direction. She had a small stack of flyers bearing what appeared to be a historic building, and came over, asking us for money to help save it. I declined and she drifted on her way down Palafox. I have a feeling that the locals know her pretty well.

My phone rang to signal the cab had arrived and sure enough, there was the yellow cab making a turn toward us. This time around, our cab driver seemed fairly run-of-the-mill. Then he started talking, and it was like he transformed pretty fast into The Dude. Upon hearing we were from New Hampshire, he dubbed us granola girls (and here I always thought that designation was attributed to Vermont!) and told us he once dated a granola girl from our state. In fact, when he was 28, he hitchhiked from Florida to New Hampshire in December to see her. That, he told us, is what you do when you’re 28 and in love.

Although we told him we were leaving at 7am the next morning, he pointed out several microbreweries and other local hotspots, and drove us by the bay at our request–“Yeah, sure. It’s not far; it will cost you like a quarter more.” We asked what brought him to Pensacola since he was originally from Virginia. He said he went to college down there and just stayed for a while. Then he left for many years and came back three years ago, telling us that some people loved it there; some people hated it–he liked it. I said, “So you neither love nor hate it, you just like it.” “Yeah,” he said in that totally trippy voice. “I like the bay and the birds.”

Hearing we were heading to New Orleans, he also told us to be careful. There seemed to be a lot of genuine concern for our well-being in this town, which was kind of nice. A second later, as we drew closer to our hotel he motioned toward a white car in the distance. “See that?” he asked. “That’s John Lennon’s old Roll Royce.” Being a huge Lennon fan, I immediately perked up. “Really? That was John Lennon’s?” I was psyched.

Pensacola was beginning to feel like a place where almost anything could be true. I wish I had longer to see more of what the town had to offer, because a lot of it seemed pretty cool. I particularly liked the pelicans representing the various branches of the military by Palafox Street. The few brief hours of exploring what I could certainly proved to be memorable.