I saw an unusual sight yesterday. It was someone hitchhiking, a young man maybe in his early 20s, a bit of a mess really, walking along the side of the road, turning when a car came his way, extending his arm and sticking out his thumb. You don’t see that much anymore.

Back when I was a teenager, and probably for as many years prior since types of transportation that allowed more than one person to get a ride came about, thumbing a ride was not an uncommon sight. It was customary to hear tales of people thumbing across country, through Canada, and across Europe, all of which inspired romanticized versions (for me at least) of what those adventures must have been like.

For those without a car, hitchhiking was a way to get around. When I was in my pre-teens and early teens, I rode my bike like other people drove their cars around town. I would ride for hours at a time, and for me, it was sweet freedom. I would ride that bike from one end of town to the next, reveling in my own ability to get somewhere on my own. I couldn’t wait until I could actually drive a car and really go somewhere. But until then, I had my bike, first a Raleigh 3-speed (a very elegant black bike) and then a bright, sky blue 10-speed. I loved both of those bikes, and went everywhere on them. I liked riding my bike so much that once when I rode in a 25-mile bike-a-thon, I rode the course 3 times that day. The people that sponsored me per mile were NOT happy when I came to collect. 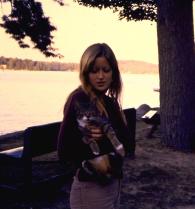 By the time I hit ninth grade, however, the bike was used less, and I hungered to go further as did many of my peers. Come tenth grade, a year in which I pretty much felt I could and should do whatever I really wished to, a new mode of transportation caught my fancy, and it was made available at the end of my thumb. I had heard all the stories, knew it could be dangerous, but the lure of the open road and the idea of where we could go, given that people might actually stop and give us a ride, was far more appealing than playing it safe.

And so we hitched rides on a regular basis; some days ditching school to go to Walden Pond, to go to Salisbury Beach or maybe just the other end of town. My parents, of course, had absolutely no idea that I was doing such a thing and would have been horrified about the dangers my friends and I were courting. We generally traveled in small groups, sometimes a gang breaking into parties of two or three and spacing ourselves down the road a piece, eventually ending up in one location within a decent range of time. If you were a girl, thumbing with a guy, it was a common practice for the girl to stick out her thumb because the rides usually came faster and easier. For someone as idealistic and young as I was at the time, the idea that we could just stick our thumbs out and get a ride was just beyond amazing. I never focused on the bad things that could happen, and I seldom thumbed alone.

There was that one day, however, when I had stayed after school and either had to walk pretty far to wherever it was I was going, or perhaps didn’t feel like calling home for a ride; I really can’t recall. I made my way out to the main road in front of the high school and stuck out my thumb. Within minutes, a cool looking car pulled over the side of the road just past me and I ran up to get in.

Unbeknown to me, however, was that in this carload of women driving toward me a few minutes before, one woman said something like, “Will you look at that pretty young girl out there hitchhiking?” Someone from the back seat looked up and said, “That’s my daughter!” and the car pulled right over. Imagine my surprise as I eagerly climbed in the car only to see my mother in the backseat, right next to where I was getting ready to sit.

I don’t recall exactly what happened next other than I believe my mother shot me a look that said, “Just wait until you get home!” and I don’t remember much beyond that. Needless to say, she was shocked, angry and beyond belief that I was so stupid. I wish I could say that was my last time doing such a thing, but it sometimes took me a while to realize I wasn’t being particularly smart. The problem was that I wanted to believe that it really was okay, and I was conceptually in love with the idea of hitting the road and meeting all these different people. It seemed like such a lark, such an adventure, and it appealed to the free spirit in me in a big way.

At some point later on that year, I would travel via the highways and my thumb with a friend, from my hometown in Massachusetts up to the Lakes Region of New Hampshire overnight, then to northern Vermont and back down to southern Vermont, a several day journey that caused two sets of parents’ significant worry but fortunately ended in a safe return home. And it didn’t take too many years later, even without the benefit of becoming a mother, to wonder just what the hell I had been thinking, putting my parents through such an ordeal. But at fifteen and just at fifteen really, I thought the world was ready to offer me such adventures and I should be free to pursue whatever I wanted. I was a little girl really in so many ways. I am very lucky that the lessons learned weren’t harder than they had been and that my parents and I both made it through that time relatively unscathed.

But even with all that I know to be true now, there’s just this bit of a feeling I still have when I see someone out there on the road, thumb out, reading to travel, that brings me back to what that felt like. I know that it may have just been someone down on their luck, trying to get a ride home, but I remember that sense of adventure with my eyes on the open road.